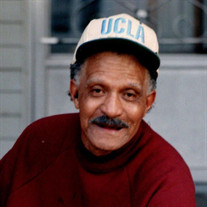 James T. Scruggs, Sr. (Pete) passed away on Saturday, December 5, 2020 at his home. He was born on August 5, 1929, in Holden, West Virginia, to Charlie and Rubie Bledsoe Scruggs. He graduated from Aracoma High School in Logan, West Virginia, where he was a standout athlete, excelling in football. As the #55 running back, James advanced to All State and was awarded a scholarship to West Virginia State University. He also was a Veteran, serving from August 22, 1951 to August 4,1953 during the Korean War in the United States Army K-Company, 53rd Infantry; 101st Airborne Division; and then the reserves until August 27, 1959. James was employed with the Kroger Company for 38 years. Many people knew him as “Jim” while working at Kroger, located at the Swaynefield Shopping Center, until it closed. He was then transferred to the Kroger in Oregon, Ohio, where he worked until his retirement. His employment history also included the Pepsi and Variety Club Companies. He took pride in his work. James was a quiet, humble man who loved listening to music, with his favorite artist being Ray Charles. He was also a skilled carpenter, building additions to his home, remodeling, painting, masonry, laying his own sidewalks, and completed whatever project he decided to accomplish. Later in his years, he couldn’t wait for the warmer months so that he could work in his yard and sit on the porch to watch the neighbors and passersby. This gave him much contentment. You would see him walking to the local stores all the way up to his passing at the age of 91. James was preceded in death by his parents, son, James “Petey” Scruggs, Jr., sister, Violet Scruggs Laney, brothers, Charles Jr., Herman, and Larry Scruggs. He is survived by his daughters Sylvia Scruggs, Olivia Hughes, and Juliet (Brentford) Brooks; grandchildren Dominique Scruggs, Harold Hughes II, Darsheis Phillips, Akil Brooks, and Jamal Brooks; 8 great-grandchildren, and his ex-wife, Elizabeth Scruggs. Wake service will be Saturday, December 12, 2020 at 10:00 a.m. followed by funeral service 11:00 a.m. at Dale-Riggs Funeral Home Chapel, interment Historic Woodlawn Cemetery. www.dalefh.com

James T. Scruggs, Sr. (Pete) passed away on Saturday, December 5, 2020 at his home. He was born on August 5, 1929, in Holden, West Virginia, to Charlie and Rubie Bledsoe Scruggs. He graduated from Aracoma High School in Logan, West Virginia,... View Obituary & Service Information

The family of James Thomas Scruggs Sr. created this Life Tributes page to make it easy to share your memories.

Send flowers to the Scruggs family.