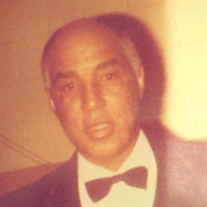 James “Jim” Allen, 98, peacefully entered into eternal rest on October 28, 2019 surrounded by his loving family at The Glendale assisted living, Toledo, Ohio. He was born on October 3, 1921 to the union of Guy and Esther (Shoecraft) Allen as one of six children in Toledo, Ohio. Jim attended Warren AME church as a child and continued to be a life long member. Jim was a joy to be around as a child and enjoyed his siblings growing up. He attended Macomber Vocational high school and was a part of the first graduating class in 1939. He went on to join the United States Air Force during World War II and served as a mechanic with the Tuskegee Flyers. He was a recipient of the American Theatre Ribbon and World War II Victory Medals. Jim was a truly decorated soldier. After returning from war, he married Anne Jackson and to this union Douglas and Larry were born. Jim enjoyed tennis, baseball, and golf with his children. He also enjoyed participating with the block watch clubs and helping his neighbors. Jim had many careers. He worked for the City of Toledo in the street department, mail handler for US Postal service for 25 years, clerk for the state of Ohio liquor store, Toledo Scales, Lott Industries, and he was a part-time bartender for various social clubs. He was also a member of the Hyatt Allen American Legion Post #538. Jim was preceded in death by his parent Guy and Esther Allen, wife Ann Allen, son Larry Allen, sisters Alice Gross and Mable Branch, and brother William Allen. Leaving to cherish his memories son Douglas J Allen, grandchildren Lance, Brandon, and Brittany Allen, great-grandchildren Xavier and Kendall Allen, brothers Charles and Joseph G Allen, God-daughter Ingrid Haynes, and special daughter Helen Price (Milwaukee, WI), and host of nieces, nephews, cousins and other relatives and friends. The family will receive friends on November 1, 2019 at Warren AME church at 10:00AM with services to follow at 11:00AM. Interment at Ottawa Hills Memorial Park Cemetery. Dr Otis Gordon officiant. Arrangements entrusted to Dale-Riggs Funeral Home

James &#8220;Jim&#8221; Allen, 98, peacefully entered into eternal rest on October 28, 2019 surrounded by his loving family at The Glendale assisted living, Toledo, Ohio. He was born on October 3, 1921 to the union of Guy and Esther (Shoecraft)... View Obituary & Service Information

The family of James "Jim" Allen created this Life Tributes page to make it easy to share your memories.

Send flowers to the Allen family.