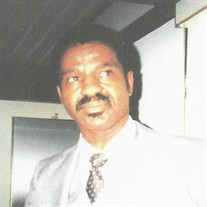 ”Mr. Harold James Reddick “Ray”, 72, passed this life Saturday, March 26, 2016, in the home of his son, Mr. Joseph Reddick of Lakeland, Florida. He was born in Toledo, Ohio on August 6, 1943, to Clarence M. and Bertha M. Reddick. He was preceded in death by both parents; daughter, Mary Antoinette; his son, Harold Jr.; one sister, Mrs. Barbara Barber; and two brothers, Vernon and Lawrence Reddick.Ray was a resident of Toledo all of his life except for the last 2 years when he made his residence with his son, Joey in Florida. He owned Rays' Wrecking/Salvage on Whitter Street for several years until a stroke made it impossible to continue the business due to the loss of his eyesight.He leaves to cherish his memory, three daughters, Ramona Reddick of Florida, Elizabeth Collins, Shirley Reddick of Toledo; and two sons, Joseph Reddick of Florida and Vernon Reddick of Toledo; one brother, Donald Reddick Sr. of Toledo; five sisters, Rev. Shirley A. Sparks (Ronald), Ms. Phyllis J. Boyd, Carolyn Black and Percilla A. Whaley, all of Toledo, Ohio and Ms. Marilyn D. McCreary of Atlanta, Georgia; 12 grandchildren; 21 great-grandchildren; and a host of nieces, nephews, and other loving relatives and friends. Visitation will be 11:00 a.m. Saturday followed by funeral services at 12:00 noon, Phillips Temple CME Church, Pastor Nicholas L. Betts officiant. Interment will be private. www.dalefh.com Visitation Friday 5-8:00 pm @ Dale-Riggs Funeral Home Chapel

The family of Mr. Harold James Reddick, Sr. created this Life Tributes page to make it easy to share your memories.

Send flowers to the Reddick family.