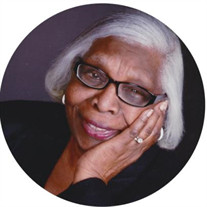 H. Hortense Ward, 91, passed on Tuesday, July 7, 2020, from vascular dementia after living with the effects of the disease for several years. H. Hortense (Lewis) Ward was born on March 28, 1929, in Rossford, Ohio. She grew up in a large family with mother (Susie Sally Whitfield Lewis), father (Grover Cleveland Ousley), three brothers (Andrew, Isaac, and Frank), and two sisters (Rozell and Delores). The family moved to Toledo, Ohio, shortly after she was born. She attended Gunckel Elementary School, Robinson Junior High School, and Libbey High School in Toledo, Ohio. After graduating from high school, she attended Wilkins Beauty School in Cleveland, Ohio, and became a licensed cosmetologist. She worked as a cosmetologist for a year before marrying Dorsey Ward and becoming a mother to their daughter, Brenda. Once Brenda was in school, she began working as a Key Punch Operator at Erie Ordnance Depot. She also worked key punch at Rossford Ordnance Depot and Ohio Citizens. While working at Ohio Citizens, Head Start hired her as an Assistant Teacher. Realizing how much she enjoyed working at Head Start, her mother encouraged her to go to college and pursue teaching. She completed her Bachelor’s Degree in Education in 1975, Master of Education in Teaching in 1976, and Education Specialist Degree in 1979 from the University of Toledo. She spent the majority of her career teaching second grade at Garfield Elementary School in Toledo, Ohio. She retired in 1996 after teaching for more than 20 years. Always active, she was a member of the United Missionary Baptist Church, where she participated in several ministries. She was also a member of Just Among Us Girls (J.A.U.Gs), Delta Sigma Theta Sorority, Inc., the Sew n’ Sews, Charms, Inc., and Red Hat Society. During her later years, she moved to Cleveland, Ohio, and became a watch care member of Antioch Baptist Church, where she enjoyed worship and several activities for seniors and women. She also actively participated in senior activities at the Eliza Bryant Adult Day Center. She spent her last days at home in Cleveland, Ohio, with her daughter Brenda (Mansfield) Frazier and granddaughter Bridgett King who she leaves behind along with her godson Stephen Copper Butler and an extensive extended family of nieces, nephews, grandnieces, grandnephews, cousins, and friends. The family of H. Hortense Ward would like to thank: T. Austin, Eliza Bryant Adult Day Center, Cleveland Clinic - Internal Medicine and Geriatrics, ER, ICU, G80, and Hospice Center for Connected Care. The memorial service for H. Hortense Ward will be on Thursday, July 16, 2020, at United Missionary Baptist Church (2705 Monroe St, Toledo, OH 43606). A wake will be held from 10:00 AM to 11:00 AM. The memorial service will follow. Attendees are required to wear facemasks and practice social distancing. H. Hortense Ward will be laid to rest in a private family burial at Ottawa Hills Memorial Park beside her beloved husband, Dorsey Ward. In lieu of flowers or other tributes to her life, the family requests that contributions be made in her honor to the United Missionary Baptist Church Board of Christian Education. Arrangements entrusted to Dale-Riggs Funeral Home.

H. Hortense Ward, 91, passed on Tuesday, July 7, 2020, from vascular dementia after living with the effects of the disease for several years. H. Hortense (Lewis) Ward was born on March 28, 1929, in Rossford, Ohio. She grew up in a large family... View Obituary & Service Information

The family of H. Hortense Ward created this Life Tributes page to make it easy to share your memories.

Send flowers to the Ward family.