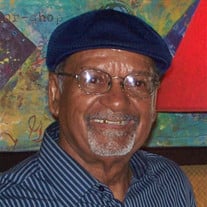 Grady Snell Sr. 82 (also known as “Fish”) was born April 29, 1932 in Georgiana, Alabama to the union of Ella Mae and Otto Snell, both whom preceded him in death. Grady went home to be with the Lord on Thursday, April 16, 2015. Grady attended school in Georgiana, Alabama. Upon leaving school, he decided to serve his country as a proud member of the United States Army serving during the Korean conflict. After his honorable discharge, Grady relocated to Toledo Ohio in 1955. He later became employed with the City of Toledo, Sewer Maintenance Department and worked there for over 30 years, retiring in 1995. Grady accepted Christ at an early age. He was a founding member of Southern Missionary Baptist Church where he was a faithful member of the Usher board. He loved his church family and his Pastor, the late Rev. Robert P. Wormely. He was a devoted family man and loved spending time with his children and grandchildren. He had a passion for gardening, cooking, fishing, and bowling. His “Sweet Potato Pies” was a family favorite at all the gatherings. He was a dedicate member of Hyatt Allen Post #538 where he serve as Commander and the Wind Jammers Van Club. In the summer, you could always find him tending his vegetable garden at one of his daughter’s home or fishing with his son Grady, Jr. Grady was a man of many hats and a very classy dresser and you would never see him without wearing a hat or baseball cap. Later in his life, he enjoyed daily walks at the mall, playing cards at the J. Frank Troy Senior Center and chillin at McDonalds with the breakfast crew. He also enjoyed his nightly routine of playing solitaire on his home computer. In addition to his parents, Grady was preceded in death by his daughter Wyndolyn (Wendy) Snell; sister Ida Mae Murasheed; brothers Henry Lee Snell and Horace Snell, and grandson Jaheim Snell. He is lovingly survived by daughters Pamela J. Snell (Michael), Glenda Snell-Bowman (Albert), both of Toledo, OH, Cynthia A. Snell of Southfield, MI, son Grady Snell Jr. (Rosalind-Marie) of Toledo, OH and their mother Nancy Hopson Snell; sisters Daisy Lee Grace of Montgomery, AL, and Willie Bell Purifoy of Queens, New York; 10 grandchildren and 3 great-grandchildren; Special childhood friend Curtis Grace and Brother-in-Law Robert Royster Sr. along with a host of relatives and friends that loves him dearly. Visitation 4-7:00 pm Wednesday @ Dale-Riggs Funeral Home Chapel Wake 11:00 am Funeral12:00 pm Thursday @ Southern Missionary Baptist Church Interment Historic Woodlawn Cemetery

The family of Grady Snell Sr. created this Life Tributes page to make it easy to share your memories.

Send flowers to the Snell family.