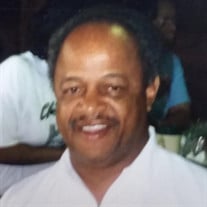 Gerald H. Gabriel, 86, of Toledo, passed on Thursday, April 23, in Arbors of Sylvania. He graduated from Macomber High School in 1952. For about a year, he attended Fort Valley State College in Georgia, where he was a basketball player. When he returned home, he attended the University of Toledo. Kindly called “Gabe” by close friends and coworkers, Mr. Gabriel worked for many years to provide for his family. He was employed by the Toledo Club as a waiter for three years, then he went on to work as a printer at Heck's Printing in East Toledo for seven years. In 1965, he joined Owens-Illinois where he was a sales service representative for 20 years. He retired in 1997 from the University of Toledo where he enjoyed his work as a custodian. When he was young, Mr. Gabriel attended Third Baptist Church. He later joined Mt. Pilgrim Baptist Church with his young family. In the 1970s, Mr. Gabriel went with family to Warren AME Church until 1997, when he also joined Payne Memorial AMEC, Holland. He served as a trustee at Payne until his health began to decline. Mr. Gabriel loved sports, especially basketball. He also liked to shoot pool, golf, bowl, and swim. Skating was another one of Mr. Gabriel’s favorite pastimes. In fact, it was while skating that he met his beloved wife, Elizabeth, with whom he would have celebrated their 65th anniversary on Sunday, April 26. A Toledo native who was born on Dec. 22, 1933, Mr. Gabriel is also survived by his daughters, Gina M. James of Auburn Hills, Mich., and Gay E. Mercer (Jim Mercer) of Waterville; three grandchildren, Gerald Cavanaugh and Breyanna Cavanaugh, who both live in Auburn Hills, Mich., and Shontelle Cavanaugh of Southfield, Mich. He is also survived by three great-grandchildren; sister, Lois Tucker of Toledo, and many cousins and friends.

Gerald H. Gabriel, 86, of Toledo, passed on Thursday, April 23, in Arbors of Sylvania. He graduated from Macomber High School in 1952. For about a year, he attended Fort Valley State College in Georgia, where he was a basketball player. When... View Obituary & Service Information

The family of Gerald H. Gabriel created this Life Tributes page to make it easy to share your memories.

Send flowers to the Gabriel family.