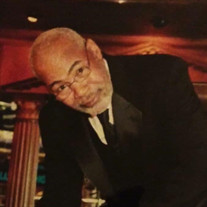 George Webber Jr. passed away December 23, 2018 at Genacross Wolf Creek. He was born on June 27, 1953 to George Webber Sr. and Martha (Smith) Webber in Marianna, AR. He was preceded in death by both his mother and father, all four grandparents,... View Obituary & Service Information

The family of George Webber Jr. created this Life Tributes page to make it easy to share your memories.

Send flowers to the Webber family.