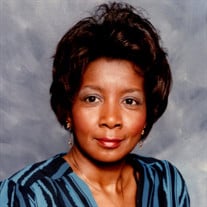 Mrs. Mattie Raychelle Geneva Owens was called home Saturday, February 6, 2021 at the age of 85 in her home. Geneva was preceded in death by her mother Mary Knighten, step-father Willis Knighten, step-sister Delores Knighten-Braylock, step-brother Alfred Knighten and the widower of Robert Luvert Owens. Geneva was born on November 21, 1935 to John Wardell and Mary Norwood in Waco, GA., and relocated to Toledo, Ohio at the age of five. She was employed as a receptionist at Electronic Repair Shop, Teaching Assistant at Lincoln Elementary and a home maker to her children. Geneva married her beloved Robert Luvert Owens March 17, 1957 and through their union four children were born. A graduate of Edward D. Libbey High School in 1954, she pursued a degree as a Para Professional at The University of Toledo. Geneva was baptized November 9, 1947 at Friendship Baptist Church, a faithful member and servant for God for 74 years, she served in the Youth, Adult and Senior Choirs, Usher Board and in the Mothers Ministry. She leaves to cherish her memory daughters Joette Owens, Sherraina Owens-Robinson of Norcross, GA, and Yolonda Owens, son Darryl Owens, 4 grandchildren, 8 great grandchildren and many relatives and friends.

The family of Geneva Owens created this Life Tributes page to make it easy to share your memories.

Send flowers to the Owens family.