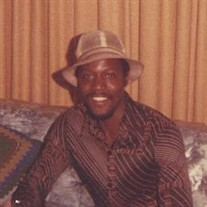 On 5th day of October 1949 Frederick Dennis Jones, 68 was born the 7th child of 12 children to Roosevelt, Sr. and Virgie L. Jones who both preceded him in death. He departed this life February 5, 2018 after a long illness. At a young age Fred displayed and uncommon intellect on multiple levels, interpersonally, linguistically, musically and kinesthetically. From early childhood Fred’s wit and verbal flair were apparent as he always added life to any gathering and every family event. He was beloved by family and friends alike. He attended Edward Drummond Libbey High School in Toledo Ohio. Along with his brother Denzell they were members of the inaugural group of students in Upward Bound Program at Bowling Green State University. After high school he served four years in the United States Air Force during the Vietnam War. Fred was always a trailblazer whether it was as the lead saxophonist of the MAXX Band or as a master painter. Only ‘creme de la creme' ascended to the lofty level of Master Painter, whatever Fred pursued he excelled in it. He like his father, and brother Roosevelt was also skilled in the art of home renovation. With every opportunity he displayed love to his family in his own unique way. His example of fun, love and excellence has inspired his children, family and friends. He leaves to celebrate his life of love his five children from his marriage with Delesia, Frederick D. Jones ll (Amanda) of (Yellow Springs, Ohio), Caprice Jones Carter (Columbus, Ohio) and Anitra Jones (Toledo, Ohio) also with Lynette —Denyne Griffin (Dale ) (Columbus, Ohio), Denzil Jones (Toledo, Ohio) and Darius Jones (Toledo, Ohio). He leaves a host of grandchildren and great grandchildren; siblings Vincent Jones (Minneapolis Minnesota), Sigmond Jones (Toledo, Ohio), Glenford Jones (Toledo, Ohio) and one sister Pamela Newsom (Victor) of (Long Beach, California). The Celebration of Life services will be Thursday February 15, 2018 wake 10:00 a.m followed by funeral 11:00 a.m. at New Life C.O.G.I.C. 1215 Oakwood Ave., Bishop Edward T. Cook pastor, Dr. Arto Woodley eulogist, interment will be private. Arrangements by Dale-Riggs Funeral Home.

On 5th day of October 1949 Frederick Dennis Jones, 68 was born the 7th child of 12 children to Roosevelt, Sr. and Virgie L. Jones who both preceded him in death. He departed this life February 5, 2018 after a long illness. At a young age Fred... View Obituary & Service Information

The family of Frederick Dennis Jones created this Life Tributes page to make it easy to share your memories.