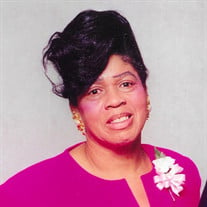 Edna Brooks Robertson beloved wife, mother, grandmother, friend and educator went to be with the Lord on February 3, 2020. The students in the Toledo community truly lost a lifelong advocate and champion of children and education. Mrs. Robertson was born on January 7, 1942 to Victoria Thornton Brooks. She married her high school sweetheart Tyronne Adams Robertson and had one son, Tyronne Jr. Mrs. Robertson was a product of Toledo Public Schools graduating from Woodward High School in 1959. After graduating from the University of Toledo earning a Bachelors Degree in Elementary Education she returned to TPS and devoted her life to the children and community of Toledo. She went on to earn her Masters and Specialists degrees in education and served the school district as an educator, assistant principal, principal, instructional planning consultant, retiring in 2002 as a school improvement leader on the Superintendent’ cabinet. Toward the end of her career and into retirement, Mrs. Robertson was active with the Ella P. Stewart Academy for Girls and instrumental in providing the students with the tools necessary to lead a successful educational career and life. Mrs. Robertson has served education and the community in multiple leadership roles in many organizations including Alpha Kappa Alpha Sorority, the Toledo Chapter of Links, TAAP, Toledo Association of Elementary Principals, TPS Women Administrators, first African American president of the Phi Delta Kappa Honorary Fraternity ,Chairman of the Toledo Urban Resource Network Educational Excellence, and first president of the Educational Leadership Association of Northwest Ohio. She served in the capacity of Board member on the TPS Foundation, YWCA of Greater Toledo, Frederick Douglass Community Association, and the Catholic Club. As a tribute to her dedication and service she was awarded the YWCA Milestone Award for Education, Save My Children Award, Toledo Council PTA Outstanding Educator Award, Delta Kappa Service Key Award for Outstanding Service, Who’s Who in American Education and induction into the Woodward High School Hall of Fame. Mrs. Robertson was a member of the New Life Church of God in Christ and has served as the secretary and treasurer of the Sunday School as well as a Trustee Board Member for the church for many years. Survived by her loving husband Tyronne, son and daughter-in-law Tyronne Jr. and Jovita, grandchildren Kaden and Kamya and many cousins, nieces, nephews and beloved family members. Visitation will be at the Dale-Riggs Funeral Home, 572 Nebraska Avenue, Toledo, Ohio on Sunday, February 9, 2020 from 2:00 p.m. – 5:00 p.m. Funeral services will be held at Rock of Praise Church of God in Christ, 1632 North Cove Blvd., Toledo, Ohio on Monday, February 10, 2020 with the family hour at 11:00 a.m. and the funeral commencing at 12:00 noon. In lieu of flowers the family requests memorial contributions be made to the Edna Robertson Scholarship Fund, c/o Fifth Third Bank, 1308 N. Reynolds Rd., Toledo, Ohio 43615.

Edna Brooks Robertson beloved wife, mother, grandmother, friend and educator went to be with the Lord on February 3, 2020. The students in the Toledo community truly lost a lifelong advocate and champion of children and education. Mrs. Robertson... View Obituary & Service Information

The family of Edna Brooks Robertson created this Life Tributes page to make it easy to share your memories.

Send flowers to the Robertson family.