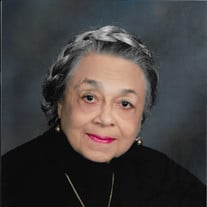 Dorothy Greer Smith 95, passed away peacefully June 22, 2016, at Hospice of Northwest Ohio in Toledo. Born in Asheville, NC, Dorothy earned a BS in Physical Education and Public Health from Tennessee State University. She married Dr. John R. Smith, M.D. and relocated to Toledo, OH, after living in Richmond, IN where her husband practiced medicine for several years. Dorothy was an integral part of the civic and social world of Toledo. She served as President of the Toledo YWCA Board of Directors and later was appointed to the Toledo Botanical Gardens Board. She was an active member of Toledo Chapter of Girlfriends, Inc., Delta Sigma Theta Sorority, Inc. and The Coterie and Study Hour Clubs. She was a faithful member of Third Baptist Church where she was active with their 20th Century Club. She supported their music program and served on many other church committees. Dorothy loved the arts and music. She supported many students and professional musicians in their pursuits. She developed, encouraged and supported numerous events that brought music to the citizens of our community. Dot, as she was called by friends, loved antiques, decorating and entertaining her many friends. Dorothy's wisdom and love provided a safe haven for her many surrogate “children”. She helped many young people formulate and fulfill their life's goals. They will miss her advice and counsel. Dorothy was preceded in death by her son, Jon A. “Buddy” Rashid in 1988 and husband of 59 years, John R. Smith MD in 2001. She leaves her daughter, Carol G. Smith of Stone Mountain, GA; son Craig S. Smith, M.D. of Kansas City, MO; sister, Sylvia James of Huntington, CT; six grandchildren; 4 great-grandchildren; nieces; nephews; her surrogate children, and many friends who loved and admired her counsel and strength. Visitation will be Tuesday 5:00-8:00 p.m., including Toledo Chapter of Girlfriends rites at 6:00 p.m., Delta Sigma Theta Sorority, Omega Omega services at 6:30 p.m., followed by The Coterie and Study Hour Clubs at 7:00 p.m. at the Dale-Riggs Funeral Home Chapel. There will be a family hour Wednesday at 10:00 a.m. followed by funeral services at 11:00 a.m., Third Baptist Church, Dr. K.J. Johnson, pastor, Rev. Ruby Radford, officiant. Interment will be at Ottawa Hills Memorial Park. www.dalefh.com

The family of Dorothy Greer Smith created this Life Tributes page to make it easy to share your memories.

Send flowers to the Smith family.