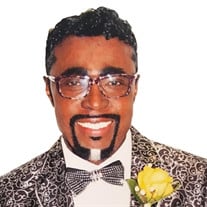 Rev. Dr. Derrick E. Roberts was born January 17, 1952; he went home to be with the Lord on December 13, 2017. Derrick was the oldest of three sons born to Rev. Dr. & Mrs. John E. Roberts. Raised in a Christian home by parents who love the Lord, Derrick accepted Christ at the early age of 7 and became active in the Indiana Avenue Missionary Baptist Church under the pastorate of his father. A child prodigy, Derrick taught himself to play the piano long before his formal lessons began at age 10. He was a graduate of DeVilbiss High School and continued to Bowling Green State University in Bowling Green, Ohio where he received a Bachelor of Music Education. He continued his educational aspirations by pursuing a Masters Degree in Education Administration Supervision from the University of Toledo. Derrick married his childhood love Deborah (McDaniels) on August 11, 1979 and together they raised two children Jeremy and Jelise. These are gifts from God, their children, a beautiful and talented daughter Jelise, a successful Musician and Artist and their son Jeremy, who was a professional football player in the NFL for 10 years. They have one grand-daughter, Joelle. The dawning of an educator at heart began as Derrick started his career teaching music in the Toledo Public School System at Keyser Elementary and assumed the position of Intern Teaching Consultant. In later years, he became the Assistant Principal at Pickett Elementary School serving under the leadership and gaining a mentor in Mrs. Edna Robertson, Principal. These life lessons in education enabled him to fulfill and continue to the next assignment as Principal at Elmhurst Elementary School. Principal Roberts left an impression with the children of Elmhurst who said “He is the coolest, best dressed Principal in the world”. The students of Elmhurst loved Principal Roberts so much and upon being challenged to run in a race with them, they expressed about him, “Mr. Roberts can really run fast for an old man.” Derrick later moved to serve as Principal at the Lincoln Academy for Boys. He was nominated as one of the “The Outstanding Young Men of America” and in 1999, he was named Principal of the Year by the Ohio Parent Teacher Association. Derrick retired after thirty-one (31) years of service to the Toledo Public School System. Continuing his quest in excellence and serving a perfect God, Derrick was the Director and a founding member of the Toledo Mass Choir/Interfaith. He held the position of Convention Planner for the National Convention of Gospel Choirs and Choruses from 1999-2010. In April 2010 in his hometown of Toledo, Ohio, he was installed as the Chairman of the Board for the Thomas A. Dorsey National Convention of Gospel Choirs and Choruses by the late Bishop Kenneth H. Moales, Sr., President. In 2011, Minister Roberts received an Honorary Doctorate from the Eastern Theological Seminary of the Common Wealth of Virginia. He leaves to cherish wonderful memories his wife Deborah, father and mother, Pastor Dr. John E. Roberts and Mother Bernice Roberts, daughter Jelise, son Jeremy (Maria Cristina) Lincoln, adopted son Darius Coleman, granddaughter Joelle Lincoln, brothers Rev. Jeffrey Roberts and Tracy Roberts, Godchildren, Patrice Jones, Arielle Johnson, Leigh Ashley Utley and other Godchildren, a host of nieces, nephews, cousins, colleagues, his Toledo Interfaith Mass choir, his NCGCC, Inc. family, his Family Baptist family and his Indiana Ave. MBC family. Special thanks to Crystal Kizer, Subrina Bennett-Long, Dr. Kasunic, Dr. Salem, the ICU and the ICCU staffs at Flower Hospital. Very special thanks to Dr. William James and the St. James “The Armory” Church for hosting the musical celebration. Services: Wednesday, December 20, 2017 Visitation - 3:00 - 6:00 PM Musical Service 6:00 - 8:00 PM St. James “The Armory” Church 3310 Nebraska Avenue Toledo, OH 43607 419.537.9736 Dr. William James, Pastor Thursday, December 21, 2017 Visitation - 3:00 - 6:00 PM Family Hour - 6:00 - 7:00 PM Funeral Service - 7:00 PM Indiana Avenue Missionary Baptist Church 640 Indiana Avenue, Toledo, OH 43604 419.241.3850 Rev. Dr. John E. Roberts, Pastor Friday, December 22, 2017 Committal Service - 11:00 AM Ottawa Hills Cemetery 4120 W. Central Avenue Toledo, OH 43606

Rev. Dr. Derrick E. Roberts was born January 17, 1952; he went home to be with the Lord on December 13, 2017. Derrick was the oldest of three sons born to Rev. Dr. & Mrs. John E. Roberts. Raised in a Christian home by parents who love the Lord,... View Obituary & Service Information

The family of Rev. Dr. Derrick E. Roberts created this Life Tributes page to make it easy to share your memories.

Send flowers to the Roberts family.