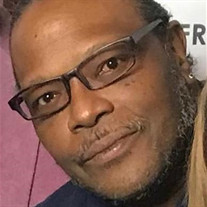 David passed away after a short illness on Wednesday, March 13, 2019 with his loving wife, Mary Campbell, at his bedside holding his hand. He had professed his belief in the Lord and assured her of his salvation, giving her comfort knowing that heaven was welcoming him home. David was born August 19, 1960 in Alliance, Ohio to Walter “Bobby” Campbell and Susan Alexander. The 7th of eight children he grew up in Cleveland, OH. and as a child was very mischievous and a known risk taker. He was a loving and caring brother who looked out for his family. David went into the military and was honorably discharged shortly thereafter because of his “flat feet”. David later moved to Atlanta where he met the love of his life, Mary Huntley, in 1994 through her brother, Harold Huntley Jr. They married on April 13, 2003. He promised that her life would never be dull, and through their years of ups and downs, good times and bad he kept his promise, and they continued to share a special enduring love and devotion for each other. In 2018 they moved to Toledo to care for his mother-in-law, Berdell Huntley. David was known as “One” to his friends because he felt that out of many, he was one that had made it. He was loyal to his friends and a defensive protector of his family that he loved above all, especially his children. Throughout his life David had many jobs and, consequently, was able to seemingly do everything from landscaping to property management, and auto repair to cooking. In fact, he described himself as a Master Griller, having trained many others in the art. David left this life at the University of Michigan in Ann Arbor. He was preceded in death by his father Bobby Campbell and step father Joseph Bates; uncles Jimmy Campbell and Charles Campbell; aunts Jannie Campbell-Evans, Annie Ruth Campbell-Dukes, and Dessie Mae Campbell-Thomas. He leaves to cherish his memory his wife Mary Campbell of Toledo, OH; his mother Susan Bates (Joseph) of San Antonio, TX; children David Campbell of Cleveland, OH, James Campbell (Hedayah) of Columbus, GA, and Sabrena Lynne Campbell of Morrow, GA; siblings, Susan Marie Campbell of Morrow, GA, Duane Campbell of Riverdale, GA, Jolana Bates of San Antonio, TX, Stresia Campbell of Cleveland, OH, Gary Hill of Boston, MI, Kathryn Hill-Ellis of Lorraine, OH, Leslie Hill of Milwaukee, WI, Audrey Cook (Rick) of Avon, CO, Richard Scott, and Oliver Scott, mother-in-law Berdell Huntley of Toledo, OH; and a host of nieces, nephews, in-laws, and friends. Visitation will be Saturday, March 23, 2019 at 3:00 p.m. followed by Memorial Services 4:00 p.m. at The Tabernacle Church, 531 Pinewood Avenue, Rev. Calvin Sweeney pastor, Rev. Dr. Charles Waters Sr., officiant. Arrangements by Dale-Riggs Funeral Home.

David passed away after a short illness on Wednesday, March 13, 2019 with his loving wife, Mary Campbell, at his bedside holding his hand. He had professed his belief in the Lord and assured her of his salvation, giving her comfort knowing... View Obituary & Service Information

The family of David Campbell created this Life Tributes page to make it easy to share your memories.

David passed away after a short illness on Wednesday, March 13,...

Send flowers to the Campbell family.