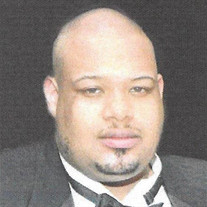 David Allen Baker, Esq., 37 of Holland, Ohio passed away unexpectedly of natural causes in his home on Monday, July 20, 2015. David was born October 26, 1978, the son of Donald and Carolyn Baker in Toledo, Ohio. A graduate of St. Francis DeSales High School (Toledo), The University of Chicago, and ultimately the University of Illinois Law School, David was a well-educated man, who emerged as an attorney with a reputation for integrity, perseverance, and generosity of heart. He established his law office in 2011 with the specific intent to serve low-income clients, in an effort to ensure that those in need would be treated justly. He embraced his civic responsibility and dedicated his career and free time to improve the lives of others. In 2012, the NAACP recognized him for his community-minded efforts with Fatherhood Connections. In his free time, David enjoyed travelling and spending time with his family; he took trips all over the world to places throughout the Caribbean and as far away as China with his parents. His favorite pastimes including watching movies—He had a vast and diverse collection of film, although comedies were his clear favorite—and reading-- He had a great appreciation for literature and was a voracious reader. He loved spending time with his family and friends to relax, play cards, and discuss the state of the world and how he might improve it. Having excelled as a football player, in both high school and college, David also loved watching University of Toledo football with his father, mother, aunts, uncles, cousins and brothers. David rarely missed a game. His father, Dr. Donald Baker, preceded David in death. He is survived by his mother, Carolyn Baker; brothers Donald, and Aaron (Kimberly) Baker; nieces, Sasha Baker, Jordan Baker, and Kiera Baker; and his nephew, Seth Baker. Friends and family may visit at Dale-Riggs Funeral Home, 572 Nebraska Avenue on Friday July 31 from 5-8pm. The funeral service will be held at Grace Presbyterian Church, 1171 Oakwood on Saturday, August 1 at noon. The Baker family asks that in lieu of flowers, contributions to Baker Scholarship Fund can be made to the University of Toledo Foundation, 2801 West Bancroft Avenue, Toledo, Ohio 43606.

David Allen Baker, Esq., 37 of Holland, Ohio passed away unexpectedly of natural causes in his home on Monday, July 20, 2015. David was born October 26, 1978, the son of Donald and Carolyn Baker in Toledo, Ohio. A graduate of St. Francis... View Obituary & Service Information

The family of David Allen Baker Esq. created this Life Tributes page to make it easy to share your memories.

Send flowers to the Baker family.