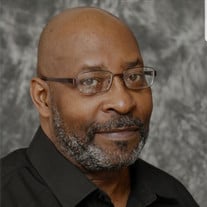 Curtis Jewell III was born November 4, 1957 in West Memphis, Arkansas to Curtis Jr. and Vella Jewell. Curtis graduated from Macomber-Whitney High School in 1976. During his 4 years in high school, he was one of the "GREATS" ! He received many awards and was named All-City in basketball. Curtis played college basketball at Cleveland State University, Bowling Green State University and Monroe Community College. In 1983, Curtis joined The Toledo Police Department as a police officer and retired in 2015. During his 32 years of service, he became an accident investigator, he was a member TPD's Honor Guard and the African American Patrolmen's League. Curtis confessed Christ as his Lord and Savior and was baptized at The Rock of Praise Church of God in Christ, where Eugene Harris, Sr is the Pastor. Curtis was a choir member and active on numerous committees within the church. First Lady Harris says ,"he was instrumental in getting things done. He was a true leader". Speaking of being a leader, Curtis coached baseball, basketball and football at some point. He really enjoyed helping, mentoring and teaching young boys the game. Coach Jewell devoted a lot of time and himself, to boys who, in some cases, he acted as a second father, all while, being an excellent, present and involved father to Curtis IV and Christopher. Curtis was well respected by co-workers, people in the community, young boys and his family! He was known for being a "Good Dude". He took a lot of pride knowing how people felt about him. He was grateful. Curtis leaves cherished and loving memories to his parents: Curtis Jr., and Vella M. Jewell, sons: Curtis Jewell IV, of Toledo, OH, Christopher J. (Aaliyah) Jewell of Jacksonville, He also leaves cherished and loving memories to Carmen J. Jewell, four siblings: Michael (JaDora) Jewell, Sr, of Smithsburg MD, Shiela Edwards, Marvin Jewell, Sr., and Sharon (Jesse) Watson all of Toledo Ohio, 3 grandchildren, Curtis V(Cinco), Braxton and Emery Jewell, Special aunt, Mary Lewis, nieces and nephews, aunts, uncles, cousins best buds, Glen Williams and Curtis King and a host of friends. Funeral services will be streamed live on The Dale Riggs Funeral Home Facebook page: https://m.facebook.com/profile.php?id=359098784170835&ref=content_filter

Curtis Jewell III was born November 4, 1957 in West Memphis, Arkansas to Curtis Jr. and Vella Jewell. Curtis graduated from Macomber-Whitney High School in 1976. During his 4 years in high school, he was one of the "GREATS" ! He received many... View Obituary & Service Information

The family of Curtis Jewell III created this Life Tributes page to make it easy to share your memories.

Send flowers to the Jewell family.