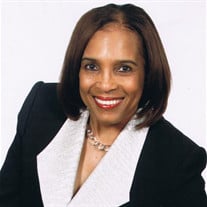 Correan was born on June 28, 1947, to Willie and Sarah T. (Jones) Byrd, in Toledo, Ohio. She passed away Tuesday, April 14, 2020, in Las Vegas, Nevada. Correan attended Toledo Public Schools. She was a graduate of Jesup W. Scott high school class of 1965. "Once Bulldog, Always Bulldog". In 1965 Correan was briefly married to Alfred Alexander. To that union, a son was born, Jeffery Scott Alexander. She continued her education and graduated from the University of Toledo with an Associate’s Degree in Supervision Business Management class of 1980. She continued her professional skills with, H&R Block over 20 years, and Registered Tax Return Preparer Correan gave her life early age to CHRIST and was baptized at True Vine Missionary Baptist Church under the leadership of the late W.L Barnes. While at True Vine, alongside her sister Shirley Ann they always knew the "Jones Girls" were involved with BTU and other activities in the church. She was encouraged by her grandparents Arthur and Mary Jones. "Don't do anything in life if God is not in it", love yourself and others never forget to pray daily. In 1960 Correan and Shirley moved their membership to Christian Community under the late Rev. Clarence Smith Sr. She and her sister Shirley sang in the choir, and would take turns going to choir rehearsal due to their responsibility of caring for their younger siblings. In 1974 Correan joined Calvary Missionary Baptist Church under the late Rev. L.H Newsom. Correan was on numerous auxiliaries including the Senior Usher Board (at that time she was the youngest member), the Intermediate Usher Board that was founded January 7, 1995 under the leadership of Rev. Floyd Smith Jr. That same year she joined the Voices of Calvary, where she served as Officer- Secretary. The last position she held was the Church Treasurer until June 2000. Correan started with the City of Toledo Cedar Development in the Water Division in 1970, she continued her career there for 30 years. In 1981 she worked Tax division- Tax Collector, promoted to Tax Auditor to Supervisor Collection Investigations, and her position Supervisor Tax & Audit Departement. Retiring in June of 2000. On September 25, 1999, Correan Alexander married Kenneth Baker, in July of 2000, Correan and Kenneth moved to Las Vegas Nevada to start their new life together. While in Las Vegas, Correan was crowned Ms. Senior Nevada 2007 first runner up, Ms. Senior Nevada 2008 3rd runner up, and Ms. Senior Nevada 2010 2nd runner up. Between competitions, she also volunteered to serve as a tabulator, judge, organizer, and a host of other duties.Correan also served as President of her AFSCME Union Sub Chapter #153 in Las Vegas Nevada for 10 years. Correan had several hobbies, first and foremost, her main hobby before anything else; she prided herself on “Looking GOOD at “ALL TIMES”, being around her friends, and bowling. Correan also loved to travel; she’s visited Montego Bay, Jamaica and Tokyo Japan. When her son Jeffery was stationed in Adana, Turkey, her brother in law asked Correan “Will you be riding on a camel”, and Correan being her fun loving adventurous self, sends a video of herself on a Camel waving saying “This is for you David”. Correan was preceded in death by her son Jeffery Alexander, parents Willie and Sarah Byrd, brother-in-law David Taylor, Willie Williams, and her God Mother Virginia Roberts. Correan leaves to cherish her memory her husband, Rev. Kenneth Baker, son Kenny J. Baker of Sarasota, FL, grandson James Alexander, great-grand, children Dai’ya, James Jr. and Dayveon Alexander of Toledo, sister, Shirley (David, deceased) Taylor, Christine (Willie, deceased) Williams, Jerome (Jeanette) Byrd, and LaVern Byrd, Uncles Sim Byrd, and Douglas Williams, Aunts Mrs. Corrine Davis, all of Toledo, Ohio. Roberta Daniels Providence. R.I. Brother- in- laws Raymond and Bradley Baker. Sister-in- laws Deborah and DeMita. Close friends: Mrs. Frances Ester, Rev. Greg Meredith, and Ms. Della Bonds. A Host of loving nieces, nephews, other Family and friends, and her church family Mount Jameson MBC in Las Vegas under Pastor Dorothy Hayes for 10 years, and Kathleen Ray founder of Ms. USA Senior. Correan Baker's services were private. Interment: Historic Woodlawn Cemetery.

The family of Correan Baker created this Life Tributes page to make it easy to share your memories.

Send flowers to the Baker family.