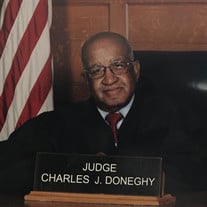 Judge Charles J. Doneghy passed away in his home surrounded by his loving family on October 9, 2018. Born in 1938, Judge Doneghy was the third of four children. His father left when he was six and his Mom, Bessie, who had a high school education, cleaned houses and worked as a maid at St. Vincent’s Hospital to support the family. In the summer the Doneghy children would stay with their grandfather until Bessie had finished her work for the day. Judge Doneghy was taught the priority of values from his mother and grandfather: the first value being the love of God; second, the value of the family unit and the requirement that you take care of family; third, the value of community. Armed with his mother's love and his grandfather’s advice, Judge Doneghy would serve his country, sit on the bench of two different courts and eventually sit on the board of St. Vincent’s Medical Center, where his mother once worked as a maid. After graduating from Libbey High School, Judge Doneghy was accepted at University of Toledo and majored in accounting with the thought of becoming a CPA. He stuck it out, even though by his junior year he had realized that he didn't like accounting. To help with the expenses of college, Judge Doneghy entered the Army ROTC program. Upon graduating, he was commissioned and assigned to the Finance Corp. He received a deferment, which allowed him to begin taking classes at the University of Toledo's Law School, where he received his Doctor of Jurisprudence in 1965. Judge Doneghy began his legal career in the law offices of Robert Penn and Joseph Flores before being commissioned for further service in the United States Army, where he achieved the rank of 1st Lieutenant. Following his service in the Army, he returned to Toledo and began practicing law. In 1969 he became an Assistant Lucas County Prosecutor and in 1977 was promoted to Chief Assistant Lucas County Prosecutor. In 1978, Judge Doneghy ran against a sitting judge and was elected to the Toledo Municipal Court. After five years at Toledo Municipal Court he was appointed to the Lucas County Common Pleas court by then Governor Richard Celeste. He was re-elected 4 times and proudly served the residents of Lucas County until his retirement in 2010. Judge Doneghy is survived by his wife of 51 years, Lera; children, Scott (Diane) Doneghy of Waterville, OH, and Atarah Doneghy Cummings of Houston, TX; sisters, Anita Jenkins of Pueblo, CO, and Joan Woods of Toledo, OH; grandchildren, Paige Hendricks, Reed M. Doneghy, Kendall Cloutier-Doneghy and Carson Cummings; nieces, Saundra (Al) Brooks, Deborah (Jeffrey) Turner, Pamela Jenkins, Ingrid Woods and Camille Woods; great nephew, Cole Turner. He was preceded in death by his mother, Bessie Doneghy; father, John Doneghy Jr.; brother, Reginald Doneghy. Throughout his life, Judge Doneghy was a faithful member of the following congregations: First Church of God, St. Paul Baptist Church, and All Saints’ Episcopal Church. Judge Doneghy spent the entirety of his career in service to many community organizations that touched his heart. Those included but are not limited to; The Boy Scouts of America, Boys & Girls Club of Northwest Ohio, Old Newsboys, Toledo Community Foundation, St. Vincent's Hospital Board of Directors, Mental Health Board, Toledo Thurgood Marshall Law Association, Wayman Palmer YMCA, Boys 2 Men, University of Toledo Alumni Association, Fredrick Douglas Community Center, Alpha Phi Alpha Fraternity, and Sigma Pi Phi Boule. Visitation will be held at Dale-Riggs Funeral Home, 572 Nebraska Ave, on October 16, 2018 from 5-8:30pm, with Alpha Phi Alpha service at 6pm and Sigma Pi Phi Boule service at 7pm. The Funeral will be at St. Michael's in the Hills Church, 4718 Brittany Rd, Toledo, OH on October 17, 2018. Family Hour at 10am; Funeral at 11am.

Judge Charles J. Doneghy passed away in his home surrounded by his loving family on October 9, 2018. Born in 1938, Judge Doneghy was the third of four children. His father left when he was six and his Mom, Bessie, who had a high school education,... View Obituary & Service Information

The family of Judge Charles Joseph Doneghy created this Life Tributes page to make it easy to share your memories.

Judge Charles J. Doneghy passed away in his home surrounded by...

Send flowers to the Doneghy family.