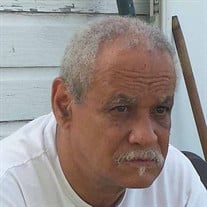 Charles Stewart Greenwade, affectionately known as “Chuck” or “Chucky”, age 72, went to be with The Lord on Saturday, December 23rd, 2017. Chuck passed away at the home he shared with his wife of thirty-three years Corliss D. Greenwade, surrounded by his loving family members. Charles Greenwade, son of the late Joesph and Juanita (Phillips) Greenwade, was born on March 16th, 1945 in Toledo, Ohio. In his youth, Chuck, accepted Christ at an early age. He attended St. Benedict Catholic School, with many of his brothers, sisters, and other relatives where he deepened, nurtured, and connected his relationship with Christ. In 1963, Chuck graduated from Jesup W. Scott High School. During his time at Scott High School, he was an avid track and field runner/sprinter and received a number of accolades for his athletic achievements. In 1964, Chuck enlisted in the U.S. Air Force where he was stationed in Minot, North Dakota. He served two years before being honorably discharged in 1966. Chuck was employed by Faurecia Exhaust Co., formerly known as AP Parts Co., and worked there as a Automotive Part Welder. He was a union member, of the Local 14 UAW, and known by his former colleagues, for his fearlessness, his efforts, and his support of other automotive workers in their fight for fair wages and job security. He retired from Faurecia Exhaust Co. in May of 1998. Chuck enjoyed fishing, dancing, listening to music, and most importantly whistling. He was an excellent cook. What he loved and was most passionate about, was preparing meals and feeding others. He would often find his inspiration for crafting delicious dishes from Julia Child’s Cooking Program or the Cooking Channel. It didn’t matter to him whether you were a loved one, a friend, or a stranger—Chuck would feed anyone hungry. He used cooking, as a form of his affection and a method of endearment toward the ones he cared for. He was always eager to prepare and share a meal. A meal that would nourish your body as well as your soul. He would tell anyone he knew that his favorite place in the house was in the kitchen. He leaves to cherish the memory of his beautiful gap-toothed smile and generous heart, his wife, Corliss D. Greenwade, and more children than letters you probably have in your first name (as he would always say). Surviving children, Tamatha Greenwade, Charles S. Greenwade II, Sean Greenwade, Dawn Greenwade, Kimberly Greenwade , Nikki Greenwade, Christopher Greenwade, and Corey Greenwade. Surviving next of kin, Robert “Bobbie”, Gerald “Gary” , Ronald “Ronnie” , and Matthew “Matt” Greenwade (brothers), Evelyn Gertrude “Gertie” Greenwade-Boltwood (sister). Ten grandchildren and three great-grandchildren. Favorite cousins “Butch” and “Jose” Reeves. Honorable mention, Crystal Taylor. A host of nieces, nephews, cousins, stepchildren, step-siblings, elders, in-laws, other relatives and friends. He was preceded in death by his father, mother, sisters-Jenny Greenwade and Josephine Greenwade (Kyser), Rose M. Greenwade (first wife), grandparents, aunts, uncles, and other kin. The family of the late Charles Greenwade would like to acknowledge, with sincerity, Hospice of Northwest Ohio Palliative Care Nurses and everyone who knew and loved Chuck, for your many expressions of kindness, prayers, condolences, and tributes during our time of sorrow. May God be with you and bless you always. Wake services 1:00 pm & Funeral services is at 2:00 pm Monday January 8, 2018 @ Dale-Riggs Funeral Home Chapel

The family of Charles "Chuck or Chucky" Stewart Greenwade created this Life Tributes page to make it easy to share your memories.

Send flowers to the Greenwade family.