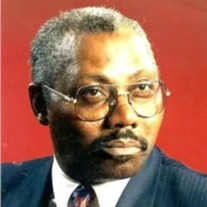 Charles James Chandler Charles James Chandler, 83 years old, made his peaceful transition to be with the Lord, Saturday, November 7th at Hospice of Northwest Ohio. Charles Chandler, son of the late Pastor Walter James Chandler and Mary Chandler was born February 10, 1937 in Bells, Tennessee. As a youngster Charles attended Bells Elementary and graduated from Central High School in Alamo, Tennessee. After graduating he enlisted in the United States Navy where he served his country for 11 years. He was honorably discharged in 1966 and moved to Toledo, Ohio in 1967 where he met and married Helen Louise Thomas on February 23, 1967. They were married 53 years and to this union were born 4 children. Charles was employed at the rubber plant for 8 years and retired from Ace Hardware after working 33 years. He was well liked by supervisors and co-workers. After he retired from Ace Hardware, management would allow him to receive employee discounts though he no longer worked there. He forged longtime friendships with several co-workers who regularly came to visit him. Charles enjoyed fishing, spending time with his grandchildren, bowling, singing baritone in a quartet group, and he especially loved sweets. There would be times when the family would hide the goodies from him and he would go throughout the house searching for candy as if it was hidden treasure. In 1986 Charles gave his life to the Lord and never looked back. For years he served faithfully as a deacon and van driver at New Life Church of God in Christ. He was on fire for God. Many a day he would witness to those in the community when he took his walk. He had no problem sharing how he had been delivered from sin. Telling about the goodness of the Lord was natural for him and he was eager to do so. Deacon Chandler was also enthusiastic in his praise. When he shouted at church, it was something to behold. His shout had SWAG - it was the epitome of cool. He would roll his shoulders when the Spirit moved him, his footwork was light and smooth. His worship was genuine. During Charles' last days in hospice when he was still able to communicate, the last thing he said to his daughter Trina was, "I'm at peace with God and I want to be with my wife." Charles James Chandler was preceded in death by his parents, his wife Helen Louise Chandler, ten brothers and three sisters. He leaves to cherish his memory his children: Cassandra Hicks of Gadsden, Tennessee, Minister Charles E. (Patricia) Chandler, Trina M. Chandler, Tina L. Chandler, Christopher E. (Leslie) Chandler; sisters Lou McClain of Toledo, OH; Nina Johnson of Columbus, OH; 11 grandchildren, 10 great grandchildren, a host of nieces, nephews, cousins, relatives, church family and friends.

The family of Charles James Chandler created this Life Tributes page to make it easy to share your memories.

Send flowers to the Chandler family.