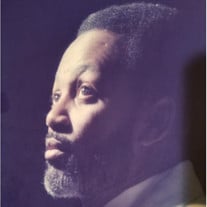 Charles Theodore Burks, was born on May 21, 1934, the second child of the union of Edward Anthony Burks, Sr. and Lucille Farris (Anthony) Burks in Toledo, Ohio. At the age of 86, he was called home to his heavenly eternal rest, on February 23, 2021. He exhaled his last breath at Divine(Laurels) Nursing Home, Toledo, Ohio. Charles was preceded in death by his father, mother and brother,Edward Anthony Burks, Jr. (Eddy), and nephew Brian Craig Burks. Ted -- as he was most affectionately called – was raised at 826 Elizabeth Street, Toledo Ohio, attended Libbey High School. Known as his own man with strong will and resolve, on August 13, 1951, he began Active Duty in the United States Air Force, where he served until December 11, 1955. In 1957, Ted married Bev (Beverly Jean Grant), who he loved, cherished, honored and cared for --- until his departing day. The two shared an unbreakable, intimate bond -- which embraced the “higher good” in one another. With an understanding of the importance to be educated individual — Ted attended night school – to obtain his GED — then continued his studies to earn his Bachelor of Science from the University of Toledo. With the ascend of his academic credentials, so went Ted’s professional position. His vocational path included roles as Laborer, a Mail Carrier, a Minority Business Consultant, a Certified Financial Planner, College Instructor at University of Toledo Community & Technical College and lastly a High School Substitute Teacher and Child Advocate for the Toledo Public Schools. Ted was a thinker, a philosopher - a student of life, the human condition, spirituality and God -- a member of Warren AME Church, Toledo, Ohio. He continually talked, walked, taught -- brotherly love. With authentic devotion,skill and finesse, Ted watched over his wife, his children, grandchildren, extended family, his home, neighbors and community. Very much aware of the “god within” and “a little love for self”, he had an affinity for the quality of this experience called life. Ted leaves to cherish his memory; his loving wife, Beverly J. Burks, son, Anthony K. Burks, daughter, Stephanie L. Burks (Weehawken, NJ), granddaughters; Celina A. Thompson and Graci T. Wade (Weehawken, NJ), and a host of nephews, a niece and an abundance of loving family and friends.

Charles Theodore Burks, was born on May 21, 1934, the second child of the union of Edward Anthony Burks, Sr. and Lucille Farris (Anthony) Burks in Toledo, Ohio. At the age of 86, he was called home to his heavenly eternal rest, on February 23,... View Obituary & Service Information

The family of Charles T. Burks created this Life Tributes page to make it easy to share your memories.

Send flowers to the Burks family.