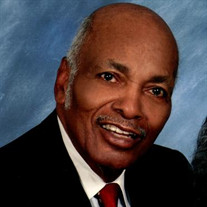 Carrington W. Thomas, affectionately known as “Ted” and “Waddell”, was born March 6, 1932 in Lynchburg, Virginia as the youngest child of Ruby Morgan Thomas and Paul Carrington Thomas. He was preceded in death by his parents; wife, Anez Thomas; sister, Geneva Cunningham; brothers, Paul Thomas, Robert Thomas, James Thomas, Jessie Thomas and Leslie Thomas. Carrington dedicated his life to Christ at an early age and served Him until his transition into eternity on February 25, 2021. In his formative years, Carrington attended schools in the Lynchburg Public School System, including Paul Lawrence Dunbar High School where he dominated as a student athlete. Known as Dunbar’s greatest athlete of all time, he held the all-time football records for total career touchdowns, total yards gains, and total interceptions in a single season. In 2002, he was inducted into the Lynchburg Area Sports Hall of Fame. He earned an athletic scholarship to attend Tennessee State University in Nashville, Tennessee. At Tennessee State University, he played on three conference championship teams and one national championship team. In addition to the brotherhood of the Tennessee State University’s football team, Carrington became a member of the Omega Psi Phi Fraternity, Inc. His dedication and commitment to his collegiate life didn’t compare to the love and commitment for his high school sweetheart. Carrington married Anez Stratton, on December 30, 1954. Trevor Diane and Michael Stanley were added to this union. In search of a better life for his family, Carrington relocated his family to Greensboro, North Carolina during a time where Americans were getting in “good trouble” to perfect quality of life for all. While in Greensboro, Carrington was employed at Hayes-Taylor YMCA and was a strong voice for civil rights which led to many of the groups meeting at the YMCA location, despite opposition. The famous Woolworth’s lunch counter sit in was strategized in one of those meetings.His leadership in the Greensboro community grew through his continued athletic involvement as a referee for Greensboro City School sports and as a member of United Institutional Baptist Church. His excellence of service earned him a promotion to become the Executive Director of Indiana Avenue YMCA in Toledo, Ohio and he relocated his family to Toledo in 1970. In this position, Carrington revitalized the Indiana Avenue YMCA by developing new and innovative programming which richly impacted the surrounding community; it is currently known as the Family House. Carrington and his family also worshiped in the community as members of Mount Zion Missionary Baptist Church. He was eventually transferred from Indiana Avenue to the Downtown YMCA until it closed. After the YMCA, he briefly worked for The City of Toledo in the Department of Community Development. From there, he worked at the Lucas Metropolitan Housing Authority (LMHA) as the Property Manager for Brand Whitlock, McClinton Nunn and Albertus Brown Homes until he retired. Carrington’s devotion to serving otherscontinued as a faithful member of United Missionary Baptist Church where he was a charter member and reliable Trustee. He was an active member of the city-wide Trustee Association where he served as Chairperson over scholarships. When Carrington wasn’t opening the doors of the church or selecting scholarship recipients, you could find him watching any sport, on any given day, in his favorite chair on the 50 yard line. Cherishing his memories are his daughter, Trevor Black (Dennis); son, Michael Thomas; daughter-in-law, Linda Thomas; granddaughters, Doreka Gans (David) of Stone Mountain, GA, Tasha Harton (Sammie), Miquelyn Thomas of Columbus, OH, and Donyelle Thomas of Murfreesboro, TN; great-grandchildren, Kabril Gans, Israel Gans, Christian Harton, Paris Harton, Imani Gans, SamereHarton, Chase Thomas and Braxton Nunn; nieces, Ruby Morgan of Lynchburg, VA, Yolanda Thomas and Bernadine Crawford both of Washington, DC; nephews Keith Morgan (Angie) of Silver Springs, MD, Robert Stratton Jr. (Joyce) of Albany, NY, Paul Cunningham of Newark, NJ and James Thomas; and a host of other loving relatives and friends.

Carrington W. Thomas, affectionately known as &#8220;Ted&#8221; and &#8220;Waddell&#8221;, was born March 6, 1932 in Lynchburg, Virginia as the youngest child of Ruby Morgan Thomas and Paul Carrington Thomas. He was preceded in death by his... View Obituary & Service Information

The family of Carrington W. Thomas created this Life Tributes page to make it easy to share your memories.

Send flowers to the Thomas family.