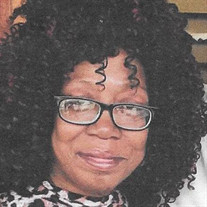 Carla Denise Woodson was born to Walter Woodson, Jr. and Maggie Alice Foster Woodson on the 28th of December the year 1966. She was born at Lakeside Hospital in Cleveland Ohio and moved to Toledo Ohio at the age of 7 years old with her family. She lived, worked and reared her children here in Toledo, Ohio. Carla enjoyed living life and her social groups range from the Baby Boomers to include Generation X, the Millennials, and Generation Z; everyone in her social group considered her to be fun to be around. She worked as a State Tested Nursing Assistant; (STNA) at the Ashley Manor Residential Care Center until her health would no longer allow her to work. She loved to cook and made hot tamales a recipe she learned from her mother Maggie. She loved to play cards and winning at spades was always a plus. She had two big cats buttercup and duchess who she adored. Her life companion for over 20 years was Alex Demont Ivy who was right by her side as she transitioned home. Carla passed away on January 15, 2020 at her home and was preceded in death by her mom Maggie Alice Woodson. Carla leaves to mourn her, two children Charmaine Latrice Garrett Woodson who her mom was proud of and able to see her complete her dream of becoming a nurse, her son Morgan DeSean Garrett (Jennifer) Woodson who always nurtured his mom, her life partner Alex Demont Ivy fondly known as Lucky of 20 years, her seven grandchildren, Kaysaun Woodson, Keeyon Woodson, Kyelle Woodson, Morgan Woodson, Desean Woodson, Tyrionna Thomas, and Mariona Woodson, her father Walter Woodson Jr., siblings Sheila Anita (Winston) Foster, Walter Antonio (Debbie) Woodson, Tasha Latrice Woodson, Troy Lamont (Regina) Woodson, Quincy Foster and Kim Foster of Memphis Tennessee, Angela (Lorenzo) Jinks of Twinsburg Ohio and Angel Martin of Los Angeles California, special friends Felicia, Patricia, Shaniqa, Thornton Kimball, and Morgan Garrett III, special cousin Antoinette Anderson and a host of nieces nephews cousins aunts and uncles family and friends. Visitation will be Thursday, January 30, 2020 from 3-5:00 p.m., followed by funeral service at 5:00 p.m. Dale-Riggs Funeral Home Chapel. Rev. Dr. John W. Williams officiant. Interment will be private.

Carla Denise Woodson was born to Walter Woodson, Jr. and Maggie Alice Foster Woodson on the 28th of December the year 1966. She was born at Lakeside Hospital in Cleveland Ohio and moved to Toledo Ohio at the age of 7 years old with her family.... View Obituary & Service Information

The family of Carla Denise Woodson created this Life Tributes page to make it easy to share your memories.

Send flowers to the Woodson family.