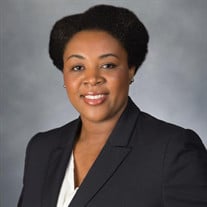 Breyan Elaine Hunter entered this world Friday, December 24, 1976 at 8:32 a.m. in Toledo, Ohio. She transitioned Sunday, July 19, 2020 at 5:56 p.m. in Arlington, Virginia with her mother Elaine Hunter by her side. Bre was the best Christmas gift anyone could ever receive! Breyan received Jesus Christ as her savior at the age of 16 and was baptized by the Rev. Floyd Rose pastor of Family: The Church Without Walls. Breyan attended Toledo Public Schools (TPS), Old Orchard Elementary, Robinson Junior High School and graduating from Jesup W. Scott High School in the Class of 1995. "Once a Bulldog, Always a Bulldog!" Breyan matriculated at the Florida Agricultural and Mechanical University (FAMU) where she received both her Bachelor of Business Management and MBA from the School of Business and Industry (SBI). Breyan was active in the Human Resource community outside of her employment. She served as Leidos' liaison to the NOVA/ Dulles SHRM mentoring program. Breyan had her SHRM Senior Certified Professional (SHRM-SCP) and was a certified Senior Professional in Human Reources (SPHR) from HRCI. Breyan was blessed with many opportunities to travel starting in her high school years. She was a 4 year member of the "Fantastic Dancing Machine" Scott High Band. She played the flute and was co-section leader her junior year and section leader her senior year. The band directors, Mr. and Mrs. Ed Dixon took them all over the U.S. They showed them that there was life outside of Toledo. Bre was part of the Toledo Excel program at the University of Toledo. She was a member of Group 3 and was a part of the first group to go to West Africa as part of an exchange program. She continued to broaden her horizons in college. As part of FAMU- SBI curriculum she had several internships, one in Washington, D.C for a logistics company, the second in New York for the Seagram Company. Her final internship was in Shanghai, China at the Shanghai Institute of Foreign Trade, a once in a lifetime opportunity. She continued travelling and she was planning a trip to Niagara Falls for us once the border to Canada opened up. Breyan had many interests and she loved to experience new things and places. She has tried flying a two seater plane and had considered getting a pilot's license. She enjoyed sky diving, skiing, hiking, biking, camping, ice skating, swimming and white water rafting. She once said that she would try anything (except bungee jumping) at least once. In 2015-2016 she trained for and competed in an Iron Girl Triathlon. The last few years she slowed her pace some and got really involved in sewing and the needle arts: making clothing-including a coat, quilting, crocheting, embroidery and cross stitching. Breyan even co-founed a sewing group. Breyan did a lot of living in her 43 years! Breyan leaves to mourn her passing, mother - Elaine Hunter, father - John D. Murphy, sister - Branda Lynne Hunter, aunts - Diane "TiDi" Hunter and Marelen Cook. She also leaves her godfather - Larry A. Jones, numerous (a multitude) cousins, extended family, her DIVAS group of friends, co-workers, and her Cut-Sew-Wear sewing group.

Breyan Elaine Hunter entered this world Friday, December 24, 1976 at 8:32 a.m. in Toledo, Ohio. She transitioned Sunday, July 19, 2020 at 5:56 p.m. in Arlington, Virginia with her mother Elaine Hunter by her side. Bre was the best Christmas... View Obituary & Service Information

The family of Breyan Elaine Hunter created this Life Tributes page to make it easy to share your memories.

Send flowers to the Hunter family.