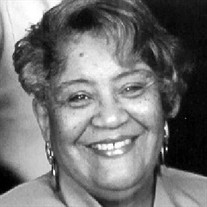 Birdie C. Hogan was born October 27, 1939 in Cadiz, KY to the union of Henry A. Gibson Sr. and Hattie E. Irvin Gibson. The Gibson family moved to Evansville, Indiana where Birdie attended St. Johns Catholic School. Hattie, still seeking a better way of life for her family, moved them to Toledo, Ohio where Birdie attended and graduated Notre Dame Academy in 1957. On Labor Day 1953, a family friend brought a young man named Clyde Hogan by her house and introduced them. This event would change their lives forever. On March 15, 1958, Birdie and Clyde were married in Warren AME Church. To this union three children were born. Birdie accepted Christ as her Savior at an early age. After coming to Toledo she eventually joined Mt. Pilgram Baptist Church where she became president of the Usher Board. After many years at Mt. Pilgram she joined husband Clyde at Warren AME Church. Birdie was employed at the Lucas County Juvenile Family Court, as a Deputy Clerk where she served dutifully for 22 years before retiring in 2001. During that time it was widely recognized that if you had questions or concerns regarding forms or procedures that needed to be filed in that area, she was the “go to person”. She was well respected in the legal community. In her leisure she was an avid bowler, fanatic sports fan, and enjoyed camping and travelling with close friends Charles and Margaret Harrington. Birdie will be remembered for her quick wit and impeccable sense of humor. She never minced her words and always spoke her mind. But most importantly, she loved and adored her children and grandchildren, who affectionately called her “Nana” and was a loving caregiver to many of her family members. She was preceded in death by her father, Henry A. Gibson Sr.; mother, Hattie Irvin Gibson; brother, Henry A. Gibson Jr.; and niece/daughter Mary Gibson Gunn. Birdie departed this life peacefully, February 22, 2017 at home in the presence of her loving family. She leaves to mourn: her loving husband, Clyde V. Hogan Sr., sons: Clyde Jr. (Monique) Inglewood, CA; Richard V. (Debra) Toledo, OH; Kevin Gibson, Las Vegas, NV; daughter Lynn V. Hogan, Moreno Valley, CA; 6 grandchildren; special daughter: Lora Porter; special cousin: Edna Allison; special friends: Beatrice Strong, Janet Gordon, Fanny Ivery, Clara Patterson, Sandra Strong, Della Gafeney, Tracey Davidson, Blanche Curtis and a host of loving, nieces, nephews, cousins and other relatives and friends. The wake will be Friday, March 3rd from 4-7p at the Dale-Riggs Funeral Home Inc.; with viewing /funeral services being held Saturday, March 4th 10 am/ 11 am at Warren AME Church. The family requests in lieu of flowers please donate to Hospice of Northwest Ohio or Warren AME Church Scholarship Fund.

The family of Birdie C. Hogan created this Life Tributes page to make it easy to share your memories.

Send flowers to the Hogan family.