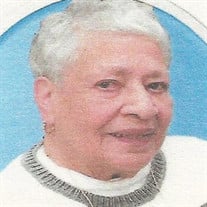 Betty Jean Stephens (affectionately known as Betty Carr), 84, passed away on Sunday, April 23, 2017 at Hospice of Northwest Ohio , surrounded by family and friends. She was born in Toledo, Ohio on May 1, 1932. She attended Gunckel Elementary... View Obituary & Service Information

The family of Betty Jean Stephens created this Life Tributes page to make it easy to share your memories.

Send flowers to the Stephens family.