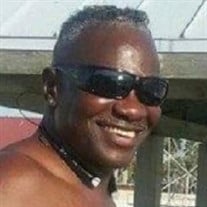 Bernard Williams, age 61, departed this life in his home on March 4, 2021. He was born in Chicago, Illinois, on June 7, 1959, to Joel Williams and Ollie Mae Moore-Williams. The family moved from Chicago, Illinois, to Missouri, then settling in Toledo, Ohio, when he was seven years old. The family attended Inspirational M.B. Church, where he and his siblings were baptized by the late Pastor James Adams. Bernard loved to sing in the choir with his siblings and other adults. As he grew older and the opportunity presented itself, he would always sing his favorite song, "We fall down, but we get up, a saint is but a sinner who fell down, and got up." Bernard attended Glenwood and Martin Luther King Elementary Schools, he graduated at the age of 17 from Rogers High School and later moved to Texas before enlisting in the United States Army. Bernard completed his bachelor's degree in business management. With his older brother's support, Bernard began his career at Jeep and later moved to Pontiac, Michigan, where he was promoted as a Project Manager for the Chrysler Corporation Headquarters. Because of his passion for serving the community, he started a second chance re-entry program for ex-offenders called "The UrbaneKnights, Inc." In his last months he was working on launching dream jobs program for individuals. Bernard is not here in the flesh but in the Spirit of those who knew him best; he will not be forgotten. Bernard was preceded in death by his father Joel Williams, mother Ollie Mae Moore-Williams, stepmother Florine Williams, sisters Martha Cowans and Ruth Ann Smith, grandparents Willie and Ora Williams. His children survive him, son Bernard Williams Jr., of Texas and daughters Olivia Williams of Toledo, Ohio and Nailah Williams of Georgia, and six grandchildren. Brothers, Richard Moore of Toledo, Ohio, Ray Charles Williams, Las Vegas, Nevada, Joe Willie (J.W.) Williams of Minnesota, LeRoy Lockridge, Herman Barringer, Johnny (Shelly) Barringer all of Toledo, Ohio, and Jessie Barringer of Georgia. Sisters, Rev. Doris (Rev. Benjamin) Thomas, of Toledo, Ohio, Helen Williams of Toledo, Ohio, Joan Ann Spears of Atlanta, Georgia, Shirley Carter of Kentucky, and Irene (Lewis) Beckham of Kentucky, Sue Renea Williams and Marilyn Williams of Georgia and Jolene “BaeBae” (Hobert) Hill of Ohio, and a host of nieces, nephews, cousins, friends, and coworkers. FUNERAL SERVICES WILL BE STREAMED LIVE ON THE DALE-RIGGS FACEBOOK PAGE.

Bernard Williams, age 61, departed this life in his home on March 4, 2021. He was born in Chicago, Illinois, on June 7, 1959, to Joel Williams and Ollie Mae Moore-Williams. The family moved from Chicago, Illinois, to Missouri, then settling... View Obituary & Service Information

The family of Bernard Williams Sr. created this Life Tributes page to make it easy to share your memories.

Bernard Williams, age 61, departed this life in his home on March...