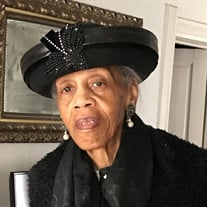 Berdell Huntley was born Berdell Ula Alvergie Thompson on July 5, 1929 in Toledo, Ohio, the 6th of 7 daughters to George and Mary Belle Thompson. She met and married the love of her life, Harold Huntley, and they were blessed with three children, Alvergie, Harold Jr. and Mary Jo. For 66 years they shared a special love and devotion to each other. Whenever you saw one, you saw the other. Harold Sr. passed in 2015, and their son, Harold Jr. in 2002. She was also preceded in death by both parents and all 6 of her sisters, Berneda Judge, Mable Eubanks, Georgetta Thompson, Marie Ransey, Louise Lockett and Odessa Dodd. Berdell graduated from Whitney Vocational High School where she was one of only 2 African Americans in her class. As an adult she was active in the PTA at her children's school, did census taking for many years for the Toledo Board of Education, worked at Sears in the tool department, and worked one summer in a factory with her daughter, Alvergie, to earn money for her college fund. Second only to her family, the church was everything to Berdell. She was an original member of Pinewood Tabernacle where in the early days she played piano(black keys only) and later served many years as the church secretary. She was known to canvass the neighborhood to pick up nieces and nephews to bring them to church. She was fortunate to be able to travel extensively both domestically and internationally, visiting 5 continents and cruising the Caribbean. She loved doing word find puzzles and working jig saw puzzles. There is still an unfinished one under the dining room tablecloth. When her health began to decline, her daughter, Mary Jo, moved back to Toledo to become her caregiver. On Juneteenth, June 19,2021, Berdell finally received her freedom when she passed away peacefully in her sleep at home. She leaves to cherish her memory daughters, Alvergie Waters (Charles) of Fayetteville, GA., and Mary Campbell (David,deceased) of Toledo, OH; seven grandchildren, London Lavallais, Bryan Evans, Tina Hardiman, Allen Huntley, Harold Huntley III, Lanita Smith and Leslye Sea-Ulis; 21 great-grandchildren, 5 great-great-grandchildren and other relatives and friends.

Berdell Huntley was born Berdell Ula Alvergie Thompson on July 5, 1929 in Toledo, Ohio, the 6th of 7 daughters to George and Mary Belle Thompson. She met and married the love of her life, Harold Huntley, and they were blessed with three children,... View Obituary & Service Information

The family of Berdell A. Huntley created this Life Tributes page to make it easy to share your memories.

Send flowers to the Huntley family.