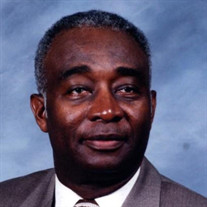 Archie C. Murrell born out of the union of the late Sylvester & Cleo Murrell, was born on the 20th of November 1935. Archie accepted Jesus Christ at an early age at Little Rock Missionary Baptist Church in Forest, Mississippi, where he learned to live by and spread the word of our Lord. Archie attended and graduated from Midway High School, while in school he also drove the Midway School Bus often leaving students who were late getting to the bus stop, including his own sisters. At the age of 18, he graduated from high school heading to Tuskegee College. With only $200 in his pocket Archie realized he wouldn't have enough money to live on so he headed North on a train to Chicago. When he arrived in Chicago, he soon realized Chicago was not the city for him and quickly boarded another train to Toledo, Ohio where he stayed with his cousin Gene Nelson. Making Toledo his home, Archie attended and worshipped our Lord at several different churches. He became one of the founding members of United Missionary Baptist Church where he served as a Deacon, and enjoyed teaching Sunday School. Archie found employment at a local car wash in Toledo, and also worked for links cafeteria. He worked those jobs until he became employed with the company A&P Groceries Stores. For a short time Archie worked as a railcar unloader and soon got promoted to baker where he made all kinds of breads and pastries. In the daytime when he was off work because of working the night shift, Archie found a way to supplement his money by cutting grass, eventually buying himself a truck. He became a fulltime landscaper owning Archie's Lawn Service operating the business for over 50 years, until retiring in 2013. Archie also taught many young men the skill of landscaping. Archie leaves to cherish his memory, Ex-Wives Johny Murrell, St. Augustine, Florida, Daughter Glynis Hauser-Palmer, Clarksville Tn, Yvonee Murrell(deceased) Toledo OH, June Britter(deceased), Toledo OH,Daughters Kathy Murrell, Renae Murrell, Sons Calvin(Rhonda) Murrell and Anthony Murrell(deceased), Sisters Margaret L.(Ned) Swinney, Jackson MS, Mary E.(Ernest) Frazier, Kankakee IL, Bettye L.(Milton,deceased) Cooper, Jackson MS, Maggie L. Murrell(deceased), Peggy S.(Timothy) Major,San Antonio TX, Aunt, Sadie(Leonard,deceased) Butler, Vicksburg MS, Special Uncle/Brother Vernard(Laura) Murrell, Forest MS. Grandchildren,JuJuan(Alysia) Hamilton, Anthony Murrell, Ashlynn Murrell, Tonisha Murrrell-Sibby, LaRhonda(David) Parker, Lakeysha(Dan) Alexander, Latresha(Michael) Walker Jr. and a host of great- grandchildren, nephews, nieces and cousins.

Archie C. Murrell born out of the union of the late Sylvester & Cleo Murrell, was born on the 20th of November 1935. Archie accepted Jesus Christ at an early age at Little Rock Missionary Baptist Church in Forest, Mississippi, where he learned... View Obituary & Service Information

The family of Archie C. Murrell created this Life Tributes page to make it easy to share your memories.

Archie C. Murrell born out of the union of the late Sylvester...

Send flowers to the Murrell family.