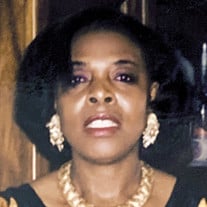 Albertha Tinisi Dagbe-Williams November 10, 1950 – December 24, 2019 Albertha Tinisi Dagbe-Williams passed away, December 24, 2019. She was born on November 10, 1950, in Monrovia, Montserrado County, Liberia, to the union of the late Frederick Wiagbe Dagbe and Ella Tarloh Togba-Dagbe. She was the seventh of nine children. Immediately after Albertha's birth, the family moved to Filokri, Lower Sasstown, when her father was elected to the Liberia National Legislature as a Representative for Sasstown Territory. She received her early education at the St. Paul Catholic School in Sasstown. Upon completion of St. Paul, Albertha was sent to Bromley Mission in Virginia, Montserrado County, and later transferred to B. W. Harris Episcopal High School in Monrovia. She completed her high school education at Bishop Ferguson High School in Harper, Maryland County. Albertha was baptized at an early age into the United Methodist Church. She was a member of the Georgia Patton United Methodist in Monrovia, the family church. Later, she would join the Episcopal Church, her paternal denomination, as a member of the Trinity Episcopal Cathedral in Monrovia. After graduating from high school, she worked for the Nigerian Embassy in Monrovia as a secretary and later for the Department of Treasury (Ministry of Finance) as an accountant. Following the death of her father in 1970, Albertha moved to the United States, first settling in New Jersey and Maryland before moving to Toledo, Ohio, where she lived until her demise. While in Toledo, Albertha continued her education and earned an Associate Degree in Business Administration. She worked for Franklin Business, Fifth Third Bank and Kroger. At Fifth Third Bank, she was a Teller for many years until her retirement in 2008. After a few years of retirement bliss, she joined the Kroger Corporation and worked until 2017. Albertha was an active member of the Liberian Association of Toledo. She was also active in the Democratic Party of Ohio, Toledo Committee. One of the highlights of working with the Committee was meeting her Congresswoman, Marcy Kaptur, and making a case for healthcare. She was a very active and supportive member of the All Saints Episcopal Church, where she was a member until her death. She was always willing to serve in any capacity to further the mission of the church. Family was very important to Albertha. Her children and grandchildren were the love of her life. She was instrumental in organizing the Togba Family Reunion. She hosted the first Reunion in Toledo. Family and friends were a stable in her household. Albertha valued the importance of education and insisted that her children and grandchildren do the same. She was an avid reader. Her passion was history and politics, and was known as the family historian. Her dream was to go back to Sasstown and establish the Fredrick W. and Ella T. Dagbe Children Library headquartered at 10 Seaside Avenue, Dagbesville, in Sasstown. She loved to sew and was good at it - something she learned from watching her mother. She was known in the community for her beautiful designs and outfits. Albertha loved her culture. She embraced it with a passion. She loved the music, dancing and the dialect. She was a member of the Sons and Daughters of Sasstown (SADOS). After nearly forty years in America, she was still very eloquent in Kru, her native Liberian language. If she did not want you to know something, she said it in Kru. She was preceded in death by her parents, Fredrick Weagbe and Ella Togbe-Dagbe; and siblings, Sophia, Joseph, Lawrence, Elkanah, Augustine and Victor. She leaves to cherish her memories her children, Christopher N. Sekpeh, Jr., (Sasha), Ella T. Gorgla, Natina A. Nimene and John W. Nimene (Garmeh); grandchildren, Sofia, Veronika and Maxwell; siblings, Agnes N. Dagbe and Eugene Dagbe of Liberia, and Mabel Dagbe-Green (Larry), of Atlanta, Georgia; her aunty, Cecelia Blamo; nieces, nephews, cousins, host of other relatives and wonderful friends. Mommy, you will be missed dearly. We love you so much. Wake Keeping, Friday, January 10, 2020, 6:00 p.m. – 9:00 p.m. Dale-Riggs Funeral Home Chapel, 572 Nebraska Avenue., Toledo, Ohio 43604 Phone: (419) 248-4254, Fax: (419) 244-0767 Website: www.dalefh.com Funeral Service, Saturday, January 11, 2020, 9:00 a.m. – 10:00 a.m. (family hour) 10:00 a.m. – 11:30 a.m. All Saints Episcopal Church, 563 Pinewood, Toledo, Ohio 43604, (419) 246-2461 Repast, Saturday, January 11, 2020, 1:00 p.m. – 5:00 p.m. Holland Gardens Banquet Hall, 6530 Angola Rd., Holland, Ohio 43528, Phone: (419) 866-9485 http://www.dalefh.com

The family of Albertha Tinisi Dagbe Williams created this Life Tributes page to make it easy to share your memories.