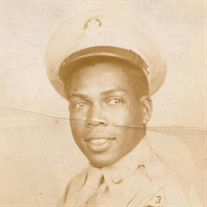 On April 24, 2021 at the age of 97, Albert heard the Lord whisper his name, so he put down his sword and shield and went home to rest with the Angels. Albert Jr, (affectionately called Frank by everyone), was blessed by the Lord, who allowed him to live a long, full and rewarding life. Albert Frank Jr. Rucker, enlisted in the US Army as a young man and went on to honorably serve his country for 23 Years. He was proud to have served in WWII. He was also stationed overseas for many years, serving in Germany, France, and Hawaii, before returning to the states, where he was then stationed in Fort Hood Texas, where he served out his time until retiring with the rank of Master Drill Sergeant. After retiring from the Army, Albert Jr., moved his family to Detroit Michigan, where he joined Ford Motor Company and went on to retire from there after another 24 years of dedicated service. Albert's favorite past times was fishing, traveling, making homemade wine, and talking on the CB radio. Albert was gifted with a good memory and was a natural GPS, before there was such a thing as GPS. He was never lost and was able to give directions to anywhere in the United States and Canada. In the 70's when CB radios were popular, he loved conversing with the truckers and other CB enthusiasts. Albert was known as the “Motor City Spider", but later changed his CB Handle to, “The SHADOW”. Albert Jr., also loved to listen to the Blues and was an avid Bid Whist player that did not like to lose. He was always trying to tell jokes to make people laugh. He always had a smile on his face,but he was a military parent, and never let you forget it. Albert Jr. was a loving husband, and devoted Father, Grandfather, brother, uncle, and friend, He was blessed to have been able to see 5 Generations of children, Grand and great grands, before the Lord called him to his reward. Albert Frank Jr. was proceeded in death, by his loving wife, Gloria Jean Rucker, his 2 brothers, McCoy and Cornell Rucker, his sister, Lula Rucker, and his 2 sons, Robert Clyde and McCoy Rucker. He leaves to cherish his memories, his sons and daughters, Steven Rucker (Gilda), Amanda Hearn (Henry), Albert Frank Rucker III(Marlene), Frances Rucker (Tolbert), Veronica Louise Rucker, of Detroit MI, Dennis Rucker, Albert Frank Rucker IV, of Toledo, OH, stepchildren Paul Harris, Crystal Darnell (David), Morlon Harris(Rosalinda), Michelle Harris, Walter Harris Jr. (Tiffenie) and Stephen Harris. He also leaves 33 grandchildren, many great children and great-great children, and a host of family and friends.

On April 24, 2021 at the age of 97, Albert heard the Lord whisper his name, so he put down his sword and shield and went home to rest with the Angels. Albert Jr, (affectionately called Frank by everyone), was blessed by the Lord, who allowed... View Obituary & Service Information

The family of Albert F. Rucker Jr. created this Life Tributes page to make it easy to share your memories.

Send flowers to the Rucker family.