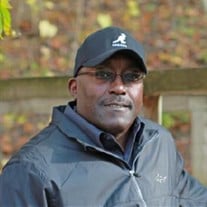 Albert R. Bowman Sr. was born on July 5, 1951 to Albert R. Bowman Sr. and Marquita Bowman. He was later adopted by Helen Haney-Bowman who had the greatest influence on his life by teaching him life lessons that molded him into the man we all knew and respected. Al attended Lincoln Elementary and graduated from Edward Drummond Libbey High School. He also attended Bowling Green State University and the University of Toledo. Al worked for Manufacturers Enameling for 17 years as a shipping clerk and warehouse foreman. He was later employed by BP Oil Refinery as a unit operator for 23 years. He retired in November, 2014. He took pride in his work and friendships with his co-workers. He was known for his wisdom and resourcefulness. Al was previously married to Treva A. Bowman and raised two children. He later met and married Glenda M. Bowman. Al and Glenda remained married and would have celebrated their 25th wedding anniversary this year. Al and Glenda enjoyed traveling and a host of other activities with their dog Bubba Bruce Bowman. Al was an avid reader. He enjoyed reading books and literature on history. He would have countless conversations with friends and relatives on various topics. He was always knowledgeable about any topic of discussion. Al was an extraordinary chess player and a recreational fisherman and photographer. Al will truly be missed by many. His love was extended to everyone he came in contact with. Al was preceded in death by his parents and his sister Brenda Bowman. Al leaves to cherish his memory his loving wife of 24 years Glenda M. Bowman, daughter Vallie Bowman-English (Ian), son Albert R. Bowman III (Desirae), brothers Michel Chiles, and Clark Drayton, sister Robin Tyus, grandchildren Aaron , Armon, Ian, July, special nephew Justin Kendrick, special niece MaKayla Avery, a number of cousins, relatives and special friends that loved him dearly. The family will receive guests on Saturday, April 8, 2017, at The Worship Center Church, 2210 Collingwood Blvd., Toledo, OH, from 10:00 a.m. until the memorial service begins at 11:00 a.m. Bishop Pat McKinstry will be officiating.

Albert R. Bowman Sr. was born on July 5, 1951 to Albert R. Bowman Sr. and Marquita Bowman. He was later adopted by Helen Haney-Bowman who had the greatest influence on his life by teaching him life lessons that molded him into the man we all... View Obituary & Service Information

The family of Albert R. Bowman Sr. created this Life Tributes page to make it easy to share your memories.

Send flowers to the Bowman family.